This post collects some basic geographic and weather facts as background for understanding flood risks in the Greater Boston area.

Downtown Boston and many of the inner suburbs lie in fairly low areas — much of them below the green 20 foot contour line in the map below, some below even the red 10 foot contour. You can click the map to enlarge it. 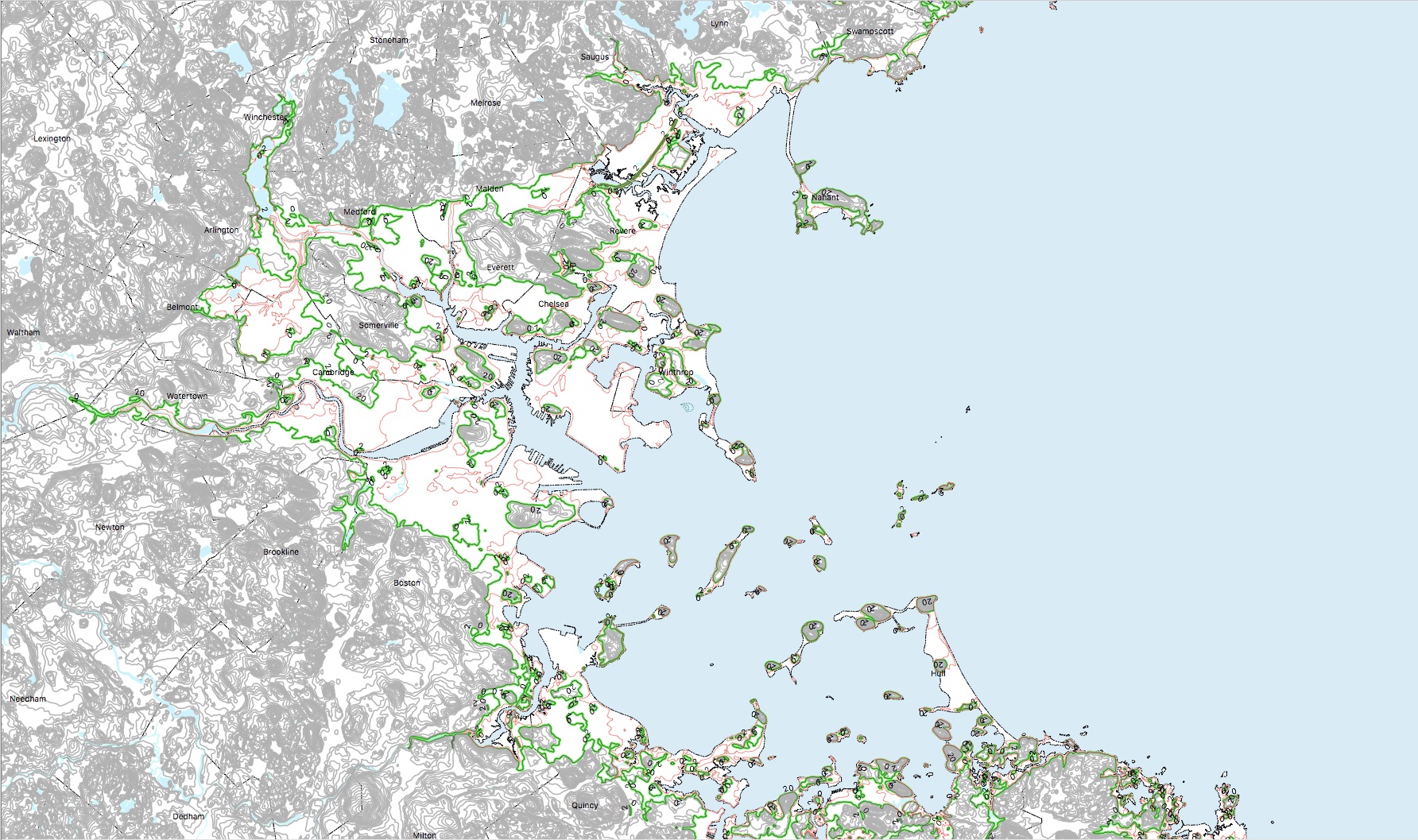 The elevation contours in this map are measured from a level referred to as the North American Vertical Datum of 1988, which is very close to the mid-point between high and low tides in Boston Harbor. 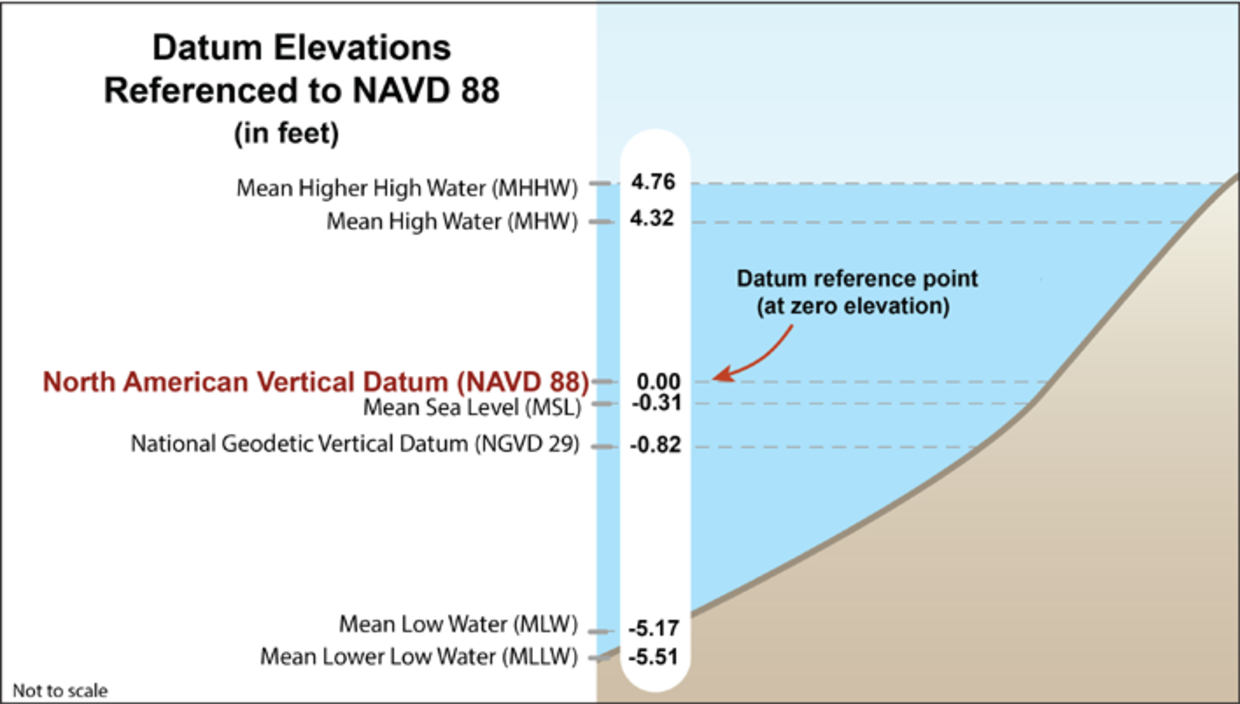 The most extreme confirmed high water observation in Boston Harbor occurred in the Blizzard of 1978 — the storm tide (astronomical tide plus storm surge) on that date has not been exceeded in almost 100 years of observations (although our January 2018 blizzard may be confirmed to have gone slightly beyond it).  The NOAA graphic below shows departures above Mean Higher High Water. The stand out departure to 4.82 feet (roughly 1.5 meters) occurred on February 7, 1978 in the blizzard. As the graphic above shows, MHHW is 4.76 above the datum, so the total maximum elevation of water we know that Boston Harbor has experienced was 9.58 feet above NAVD.  (For more history of tide fluctuations, see this fascinating study which suggests that there is an 18 year cycle in tide levels.)

So, very roughly, one could think of the 10 foot contour as defining the areas at risk from sea inundation in storms at our current global sea level.  There are three important qualifications to that concept:

First, in areas directly exposed to driving waves, water levels can exceed 10 feet. After the blizzard of 1978, the USGS surveyed highwater lines and documented some coastal locations that got water well above the 10 foot level.

Second, there are many areas that are below the 10 foot level that are relatively safe from inundation because they are protected by a seawall.  The Charles River and Mystic River basins, shown below, are protected by sea walls at their mouths. Flow through these seawalls is regulated by gates so that the water within those basins stays close to the zero (mid-tide) level.  These seawalls have huge pumps built-in so that they can keep the river from rising much even when extreme rain-driven flow coincides with the gates being closed to a high tide. 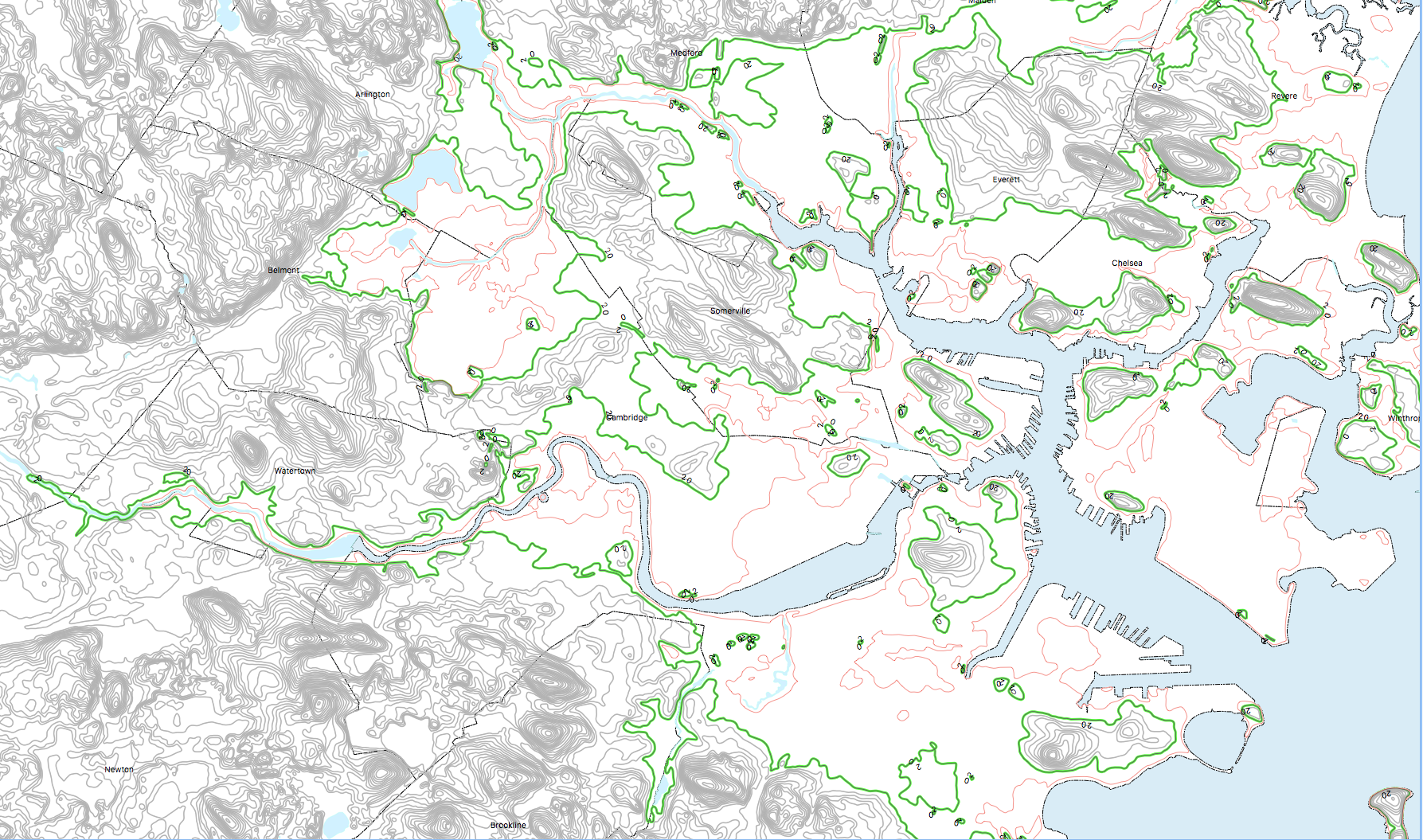 Third, just because higher levels have not happened does not mean they could not happen. Storm tide can vary widely depending on very specific storm conditions and their interaction with local topography, and of course, the timing of the storm with respect to high tides. The National Hurricane Center conducts a modeling exercise where thousands of storms are simulated to identify worst-case “perfect storm” hurricane impacts. These models suggest the possibility of flooding in extreme storms well beyond the levels observed to date — out to the 20 foot contour — even at current sea levels.

The map below, based on NHC worst case data via MassGIS, shows the composite of all areas reached by different simulated Category 4 Hurricanes (the blue and purple coloring) against the green 20 foot contour and the darker green 30 foot contour (which lies very close to the 20 foot contour throughout the region). These models should not be considered to mean that the practical risk extends that far — there is no probability attached to these simulations. This not the 100-year or 500-year storm. This is the composite of possible impacts of many maybe-someday-maybe-never storms. 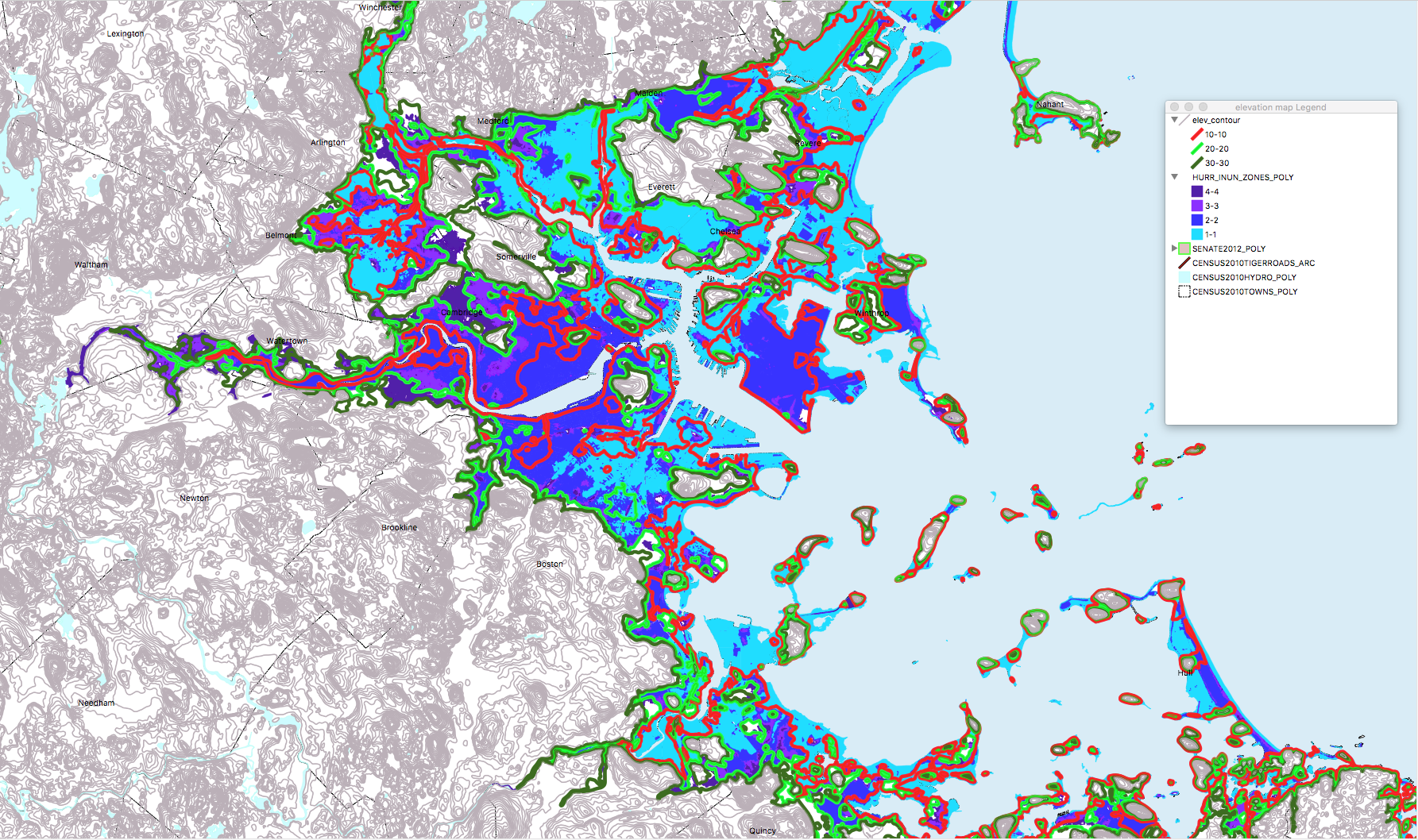 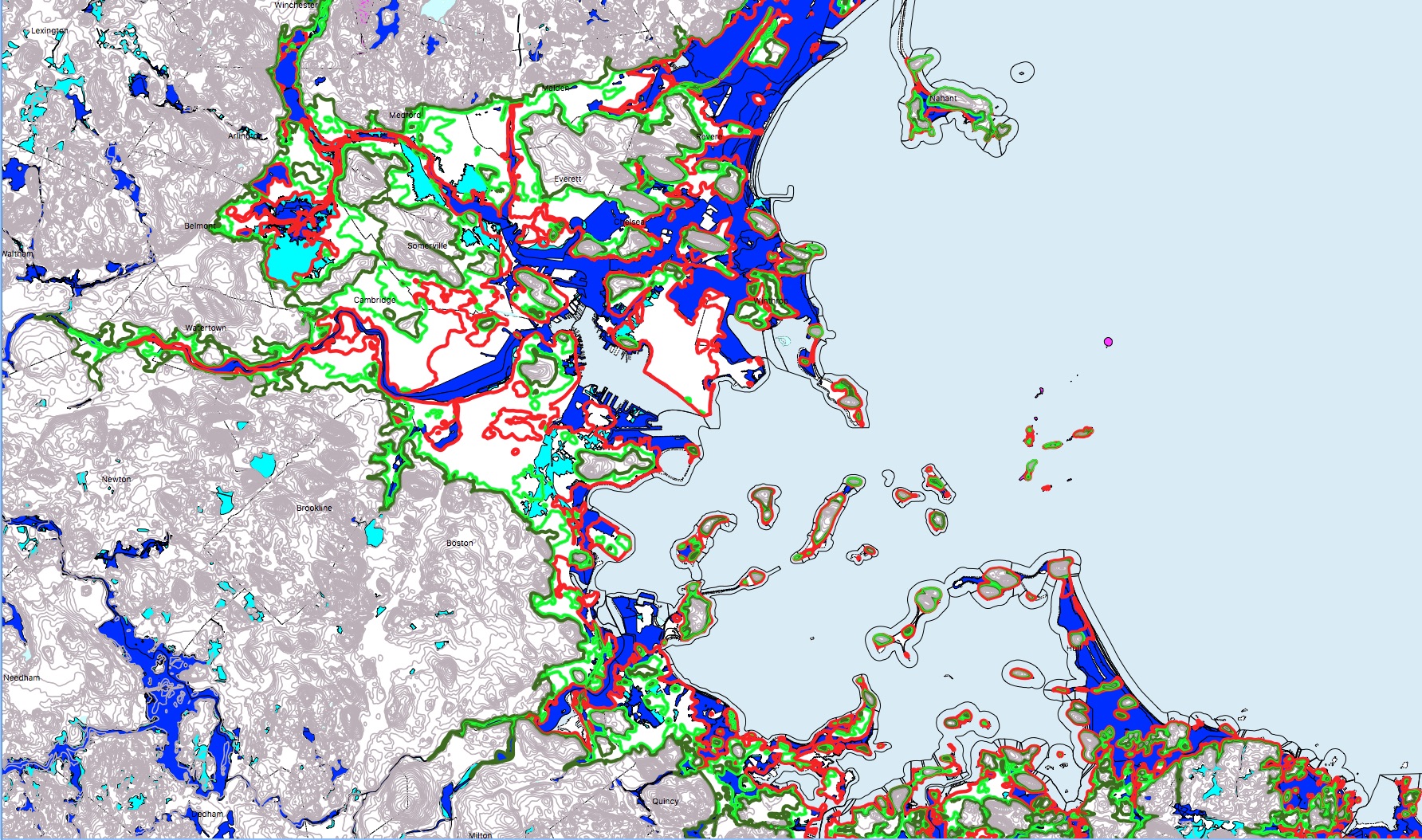 To summarize, based on history and the FEMA analysis, the meaningfully at-risk areas lie mostly within the 10 foot contour and some of the lower areas are not at meaningful risk due to our sea walls; theoretically possible flooding extends further to the 20 foot contour. It should be noted that areas next to rivers at higher elevations are also subject to flooding.

The FEMA risk maps do not account for sea-level rise or increased rain fall due to climate change. By 2100, it is expected that sea levels will rise, perhaps by as much as two meters, a little over six feet.   Storm surge risks may increase as storms grow larger and more frequent. One analysis conducted for the City of Boston pegged the 1% storm in 2100 (in the higher global carbon emissions scenario) as being 8.2 feet higher than today’s 1% storm. After 2100, sea level may continue to rise.

The good news is that all of these conversations are happening — many agencies are conducting very sophisticated modeling to assess the risks as precisely and realistically as possible.  Given the district that I represent, I’m particularly concerned about the third and fourth conversations — the protections for the Charles and Mystic basins and the critical infrastructure.

In the unthinkable scenario — well beyond any meaningful planning horizon — that global warming were to continue unabated for many centuries, and the major ice masses of Antarctica and Greenland were to melt entirely, global sea levels might rise by over 250 feet.

As any cyclist can tell you, the land generally rises as one moves west out of Boston. It reaches the 300 foot level around Route 495. If one wanted to identify mainland that is more or less guaranteed to stay dry 1000 years from now, that’s about as far west as one would need to go. 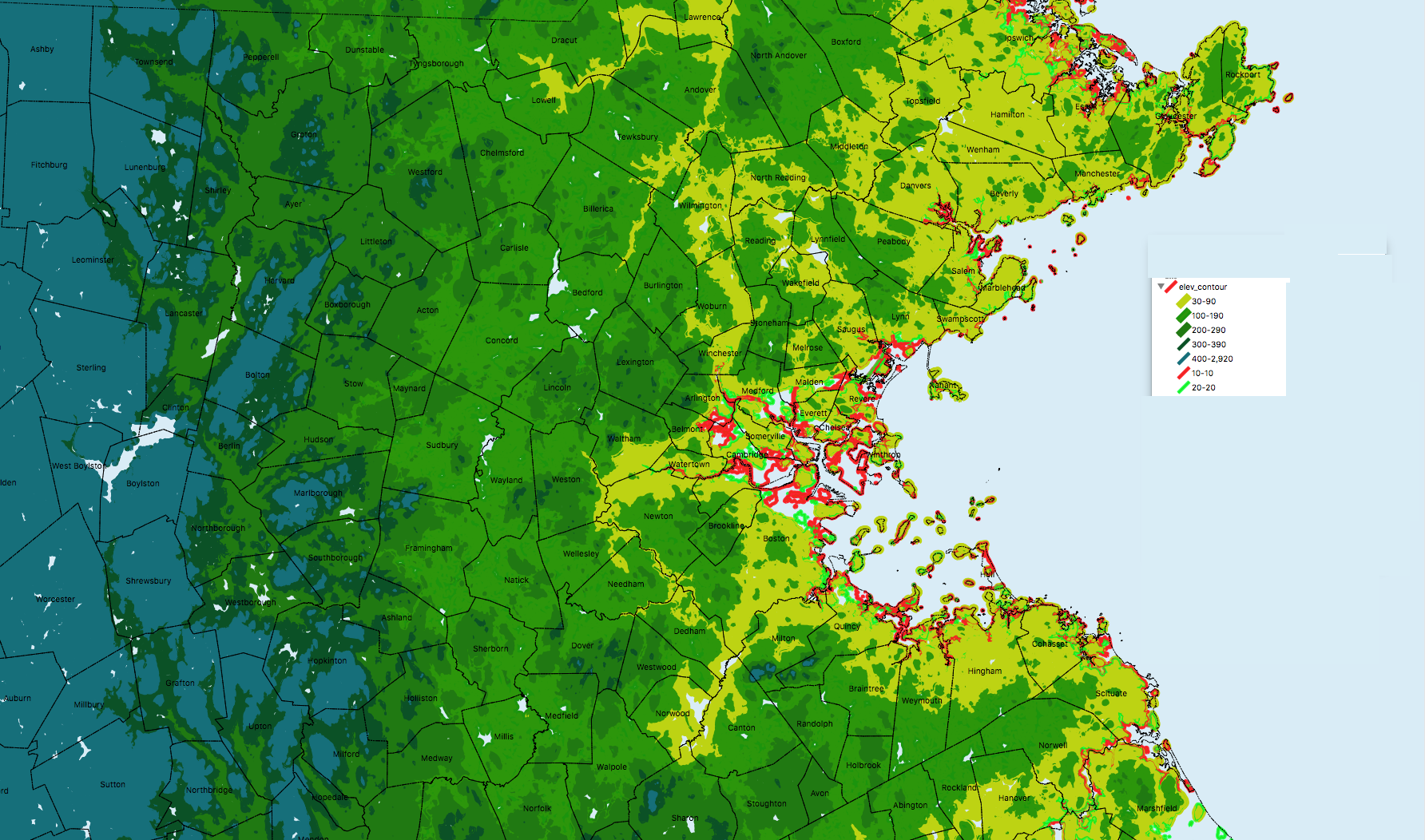 Note, maps in this post were created using Cartographica combining municipal boundaries from the U.S. Census via MassGIS and other data layers from MassGIS (identified above) with elevation contours from the U.S.G.S. — The U.S.G.S. contours are derived from the National Elevation Dataset .

It’s worth acknowledging that much of the area that we need to plan to protect was beach or marshland in 1600. UMass has a lovely collection of historic maps from which the two images below are linked. 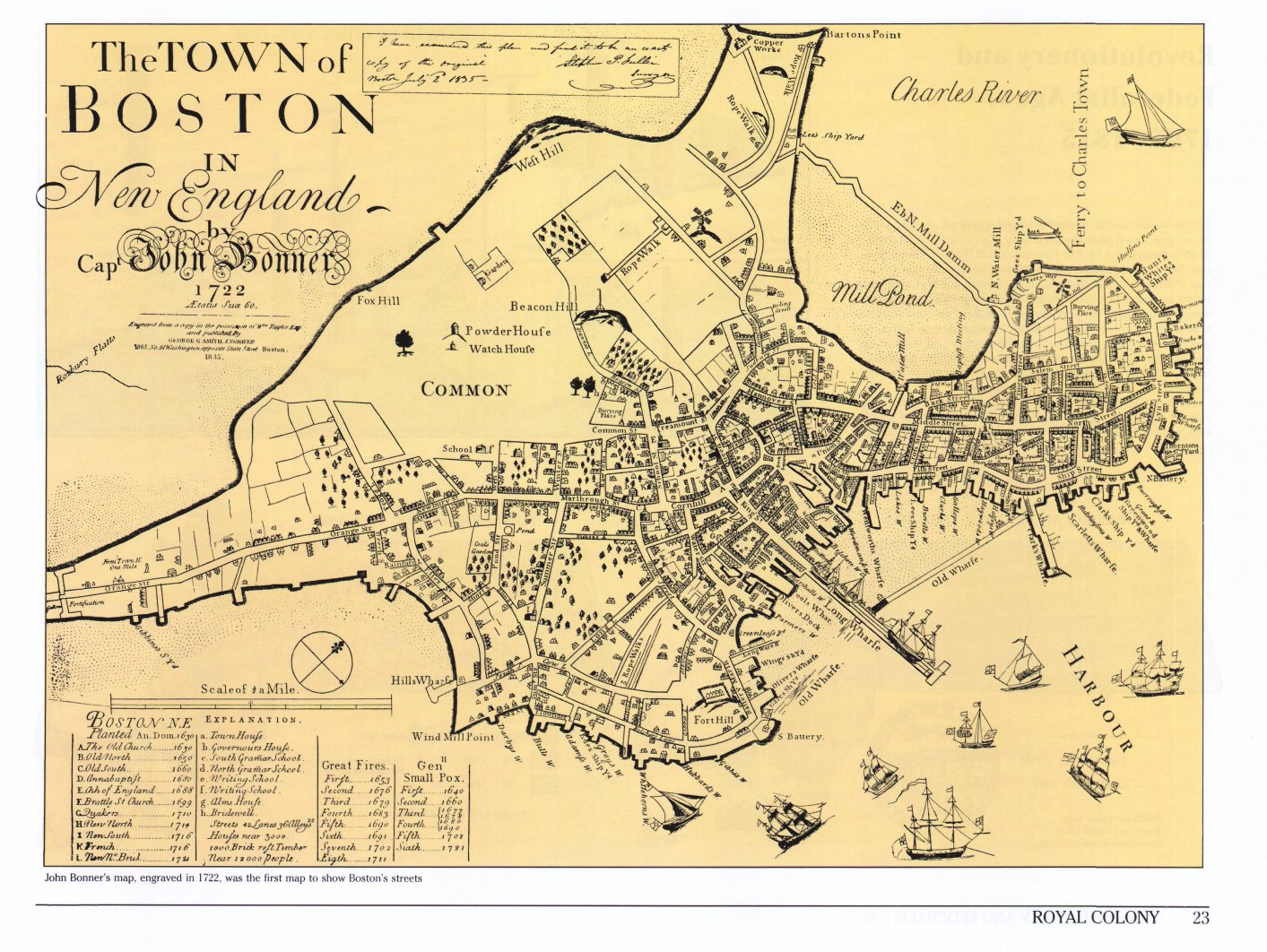 The maps above show the progressive filling of land around Boston.

The other development strategy that we pursued was to create drainage structures and sea walls to convert marshland into terra firma. The seminal planning study by the famed MIT engineer, John Freeman, that led the drainage of the Alewife swamp in the early 20th century is available online:

Below appears an image from that study showing what is now the heavily developed “quadrangle” area in Cambridge:

18 replies on “Planning for Rising Seas — Lay of the Land”