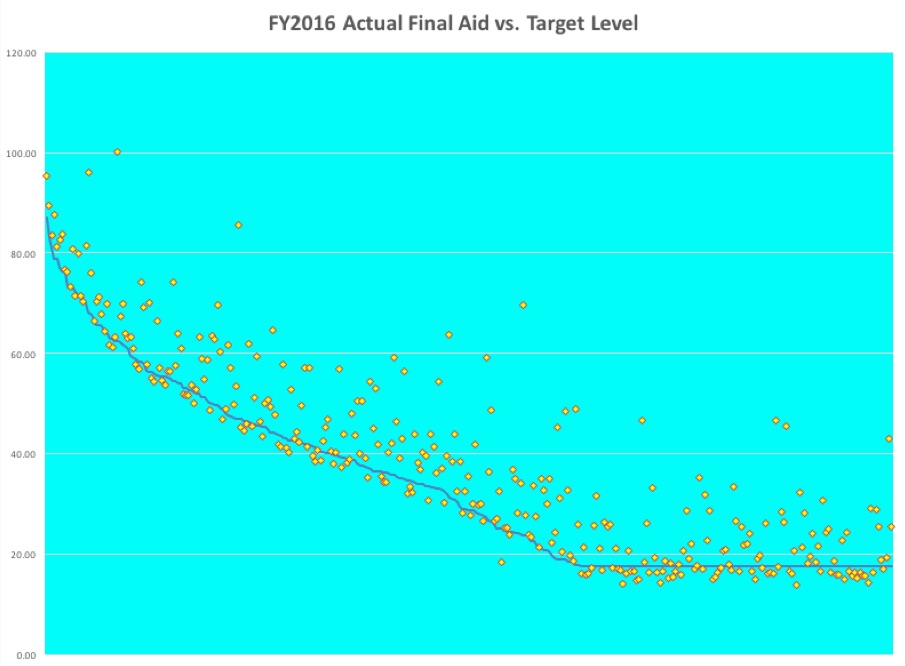 Two events this week were good news for local schools.

First, the Senate Ways and Means Committee released a draft budget which further increases the major aid programs that benefit local schools.    The Senate draft builds on the House budget approved in April, which was already very strong for local schools.

Each of the communities that I represent — Watertown, Boston and Belmont —  will benefit in different ways.

Watertown will benefit from the Senate’s decision to finally meet the 2006 aid reform commitment to provide at least 17.5% of each district’s “foundation budget” through the Chapter 70 (school aid) program.  Belmont and Boston have been at this level for several years and I’ve been concerned to bring Watertown up to the same level.  There was never any policy justification for Watertown being at a lower level; the disparity was the unintended result of an overly complex mathematical formula.  The graphic above (from an advocacy document I prepared then) shows the many other communities that were receiving aid below their target level in FY16 — with the senate budget, no community should fall below the target line.

Boston will benefit from a roughly 25% increase in the statewide program that cushions the state-aid consequences of students departing to charter schools.  When a student from a school district elects to attend a charter school, the district must pay to the charter an amount equal to the district’s total per-pupil average cost.   In Boston, because it has relatively high per pupil spending, that rule is a significant factor attracting charter schools.    The charter charge is deducted from chapter 70 aid, so that Boston has  seen its net state aid go down over the past few years.  The state has a program designed to cushion that loss by reimbursing districts for the first few years of charter charges, but has not fully funded that program.  Together with other Boston legislators, I have pushed for full funding.  The 25% increase will help considerably, although it will still leave the program less than fully funded.

All three communities will benefit from an increase in the special education “circuit breaker”.  This is the program that reimburses districts for the very high costs that they may incur when they need to place a student with special needs in an out-of-district program.  Some such programs run into the hundreds of thousands of dollars per year and the state reimburses a portion of those costs through the circuit breaker.  Dollar-for-dollar, this is one of the state-wide programs that benefits my communities most directly.  The senate budget fully funds this program so that the state should be able to reimburse 75% of excess out-of-district costs. See this post for more explanation with Belmont as an example.

In the long run, all three communities will benefit from efforts to increase the “foundation budget“.  The foundation budget is a fundamental concept underlying the chapter 70 state aid formula.  It is a computed number intended to reflect the necessary costs of educating the specific students that a district has.  It starts with the number of students enrolled, but includes various adjustments to reflect the costs of educating special education students, English language learners and  students from economically disadvantaged backgrounds.  It also includes adjustments for the rising costs of fringe benefits.

Over the past few years, a consensus has developed that the foundation budget is inadequate.  A Foundation Budget Review Commission recommended increases.  The legislature has been unable to act on those recommendations  because they would be too expensive.  Chapter 70 aid is computed as a share of the foundation budget.  (The share varies for each community according to its wealth.)

The senate budget begins to implement the FBRC recommendations.  The adjustments are not great enough to outweigh other factors in the aid computations for the communities that I represent, but as the adjustments progress to appropriate levels over the next few years, we can expect to see some benefit.

Following the budget release, the second major action this week was a senate vote to create a process to systematically review the foundation budget commitments each year to assure that we continue to make progress towards a more realistic budget.

These are not radical changes, but they do offer meaningful help for local schools.    Of equal importance, they signal a commitment to further progress.  Over the next couple of months we can hope that they will all be finally approved by both branches and by the Governor.

13 replies on “Movement on School Funding”