As noted further below and in the discussion of the March survey the survey methods are not designed to be representative. They reflect people who are engaged in the community or in political issues, mostly within my senate district. However, the sample size is large at 2,662 and the results are broadly consistent with recent statewide polling and national polling.

The survey outreach was identical to that of the March survey — including direct email, news group email and Facebook, reaching people mostly in my Belmont/Watertown/Boston district. As before, the survey was entirely anonymous.

Email delivery occurred starting at approximately 8AM on Saturday morning, April 25, 2020 and the Facebook post went up about the same time. The survey was closed a little after 11AM on Monday, April 27. The survey was open for approximately 51 hours. However, 80.5% of the responses came in during the first 12 hours and 87.2% came in during the first 24 hours. There were no major changes of social distancing policies in Massachusetts while the survey was open.

Our outreach methods were not designed to produce a representative sample of the community. As discussed previously, the outreach heavily targeted people who are engaged in their local community. It should be added that the outreach would especially favor those interested in online discussion of issues, especially issues of state policy. These engaged people were sent an email with a fairly neutral subject line, exactly as in the March survey or viewed an identically worded Facebook post.

For reasons that are unclear, the 24 hour response to survey was only 71% of the 24 hour response for the March survey. This does not appear to reflect survey timing. We left the survey open through Sunday into Monday (an additional 27 hours covering the same weekdays that the March survey was open ), but did not gather much additional response. The final total response to the survey was 2,662 (excluding 12 consecutive entries from the same browser/ip combination in a period of 40 minutes) as compared to 3,259 for the prior survey. The lower response may reflect factors like what the weather was when the email hit people’s inbox or perhaps people are getting a little tired of COVID news and discussion.

The age and geographic distribution was similar to the March survey. Those 65 and over were slightly more heavily represented at 35% as opposed to 29% in the March Survey.

The full text of the questions can be viewed at this link. The main difference from the March survey was that we did not include an “other” option. We dropped the “shelter in place” question, which people interpreted in different ways and we added a question about outlook for the pandemic.

Crosstab A: View of response vs. age

Crosstab B: View of response vs. zipcode

Crosstab F: View of response vs. prior survey participation

The anonymous row by row results can be downloaded in spreadsheet form for additional analysis here.

Its timing is different and its questions are different, but the following poll from the Pew Research Center is broadly consistent with the present survey in showing strong support for social distancing. 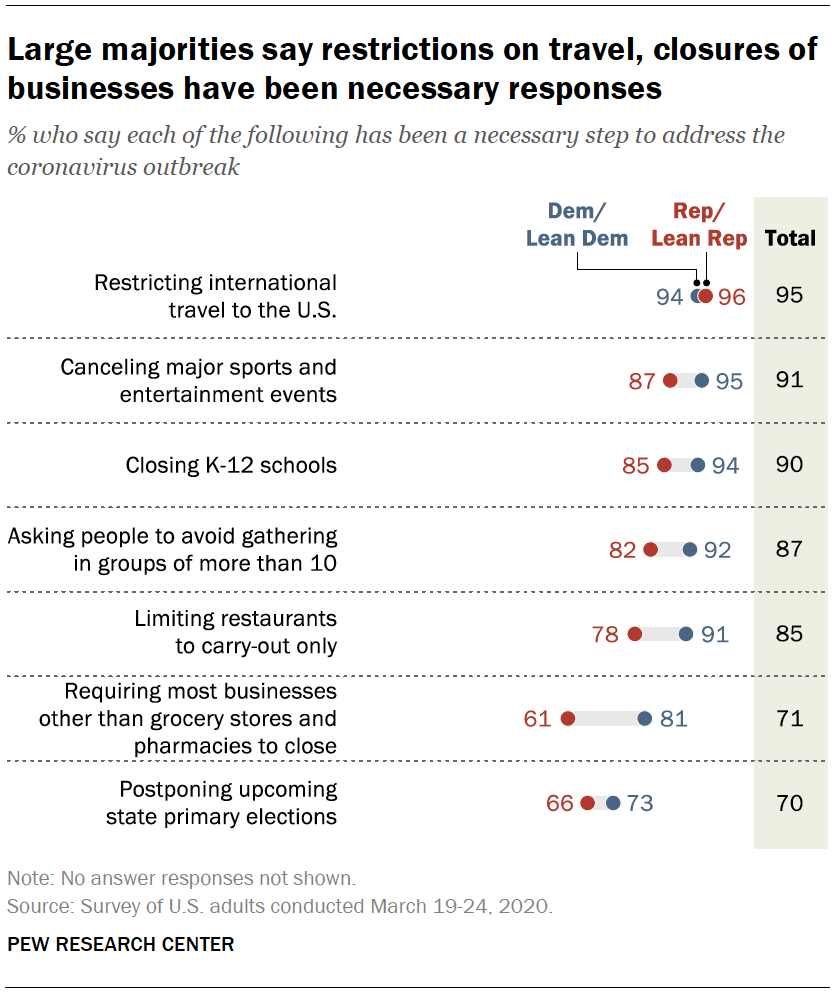