For a pedestrian headed upstream and trying to stay close to the Charles, the going gets tough at Route 30.  There have been some recent improvements and more are planned, but for now, it is a badly connected stretch of river.

Upstream from Route 30, the Charles winds under the massive interchange between Route 95 and the Mass Pike. There are six freeway crossings and a railroad bridge in less than a mile. As I confirmed the hard way on a recent exploratory run (mapped below), there is no way to stay close to the river through this stretch. 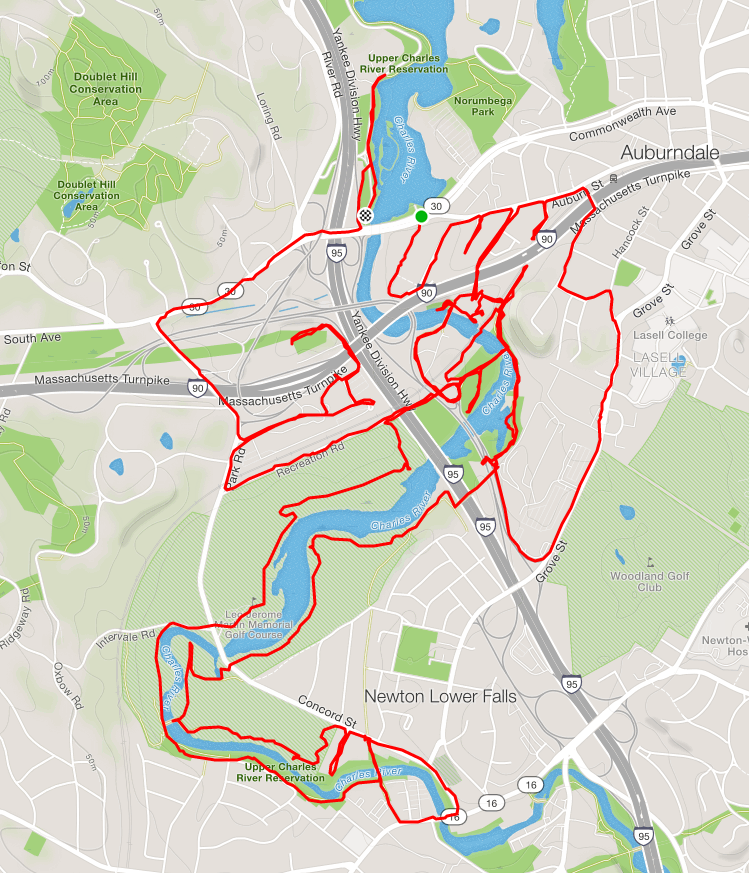 Simplified routes on either bank are combined in this loop route and are further described below.

The bulk of the highway interchange lies on the north/west bank of the river.  To go upstream on the north/west bank of the river from Route 30, one has no choice but to run west on Route 30 and turn South on Park Road to reach the river at the Leo J. Martin Golf Course.  Depending on the weather and the time of day it may be safe and neighborly to traverse the golf course through various routes.  There is a nice little pedestrian bridge that connects the golf course upstream from the Concord Street road bridge.

That bridge meets a proper path along the north/west bank that runs upstream most of the way to Route 16.  It may be best to reach that path with minimal intrusion on the golf course by turning right  off Park Road on to Intervale Road then turning south (left) off Intervale shortly before it crosses the commuter rail tracks.

If one wants to stay on the south/east bank of the River going upstream from Route 30, one has to run east on Route 30, right on Auburn Street and right on Charles Street, which drops under the Mass Pike to reach a small DCR park.

From this park, there is a underpass below the commuter rail that leads to a DCR path along the south/east bank.  Unfortunately, this underpass is now closed and although there is an obvious possible scramble over the tracks, crossing MBTA tracks away from marked crossings is always illegal. 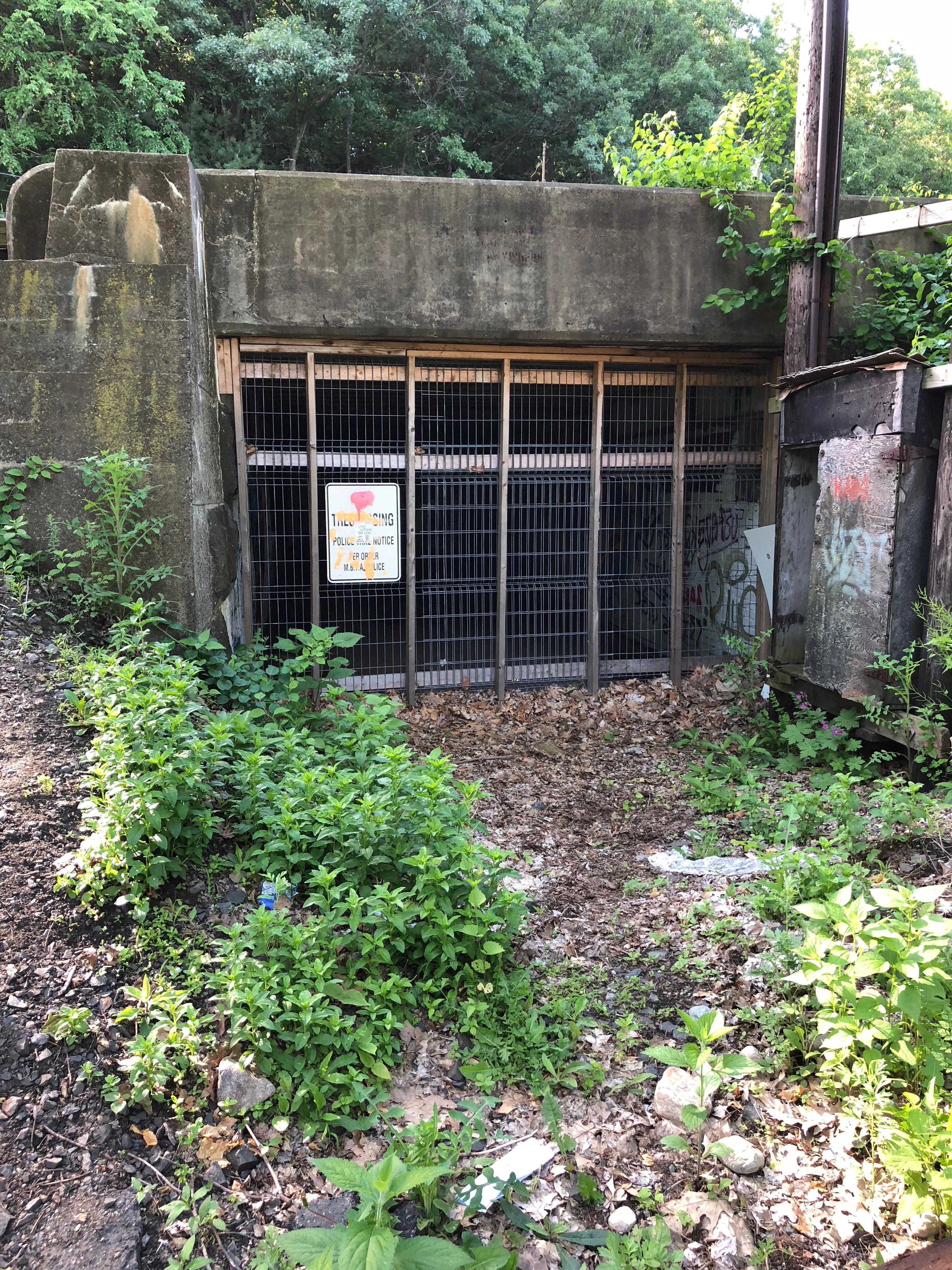 Nor is any alternate route under the railroad tracks.  The bridge abutments extend well into the water. 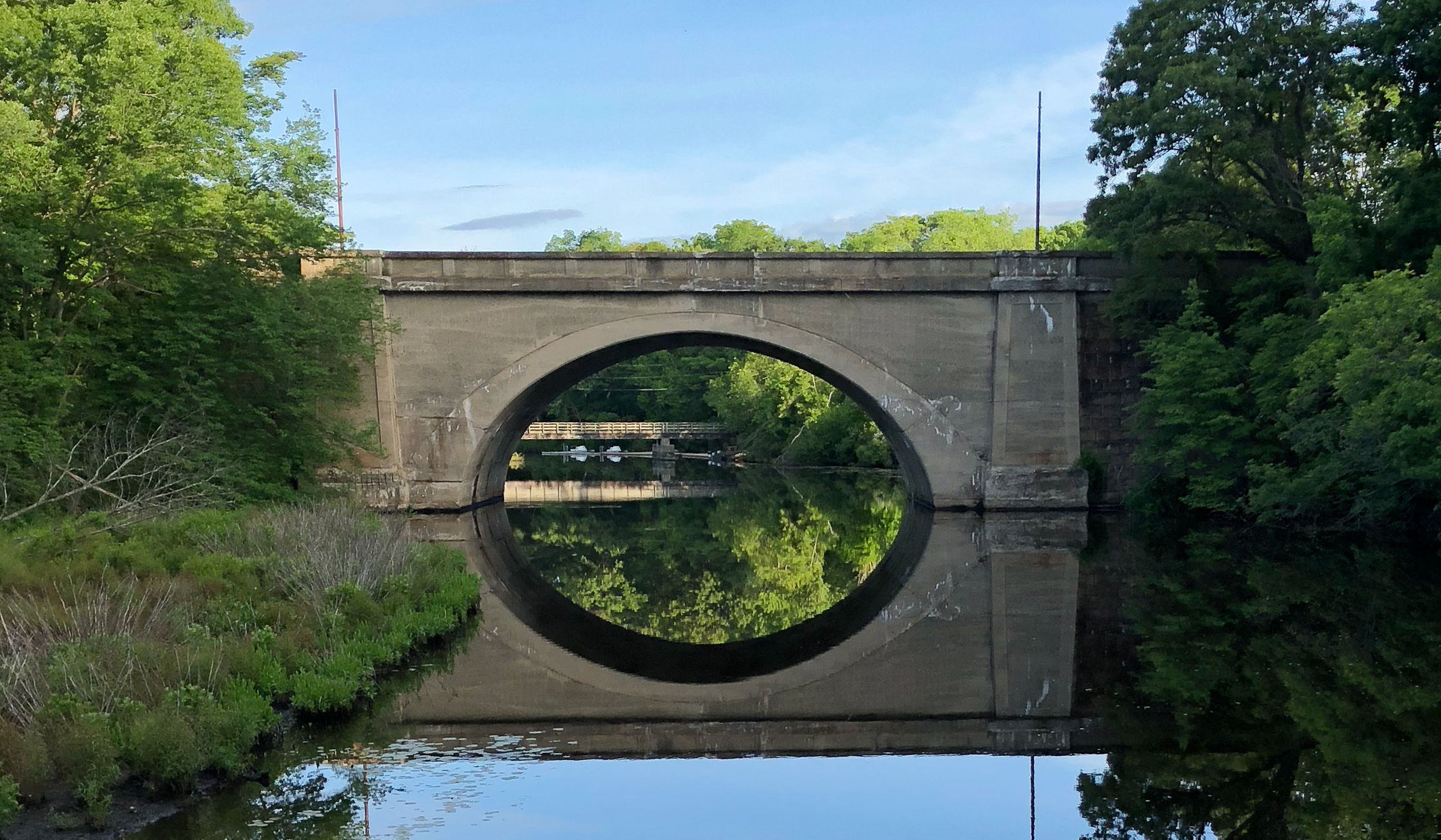 However, just upstream from the tracks, at the north end of the same DCR property and adjacent to the LaSalle boathouse, there is a defunct pedestrian bridge — the Recreation Road Footbridge. 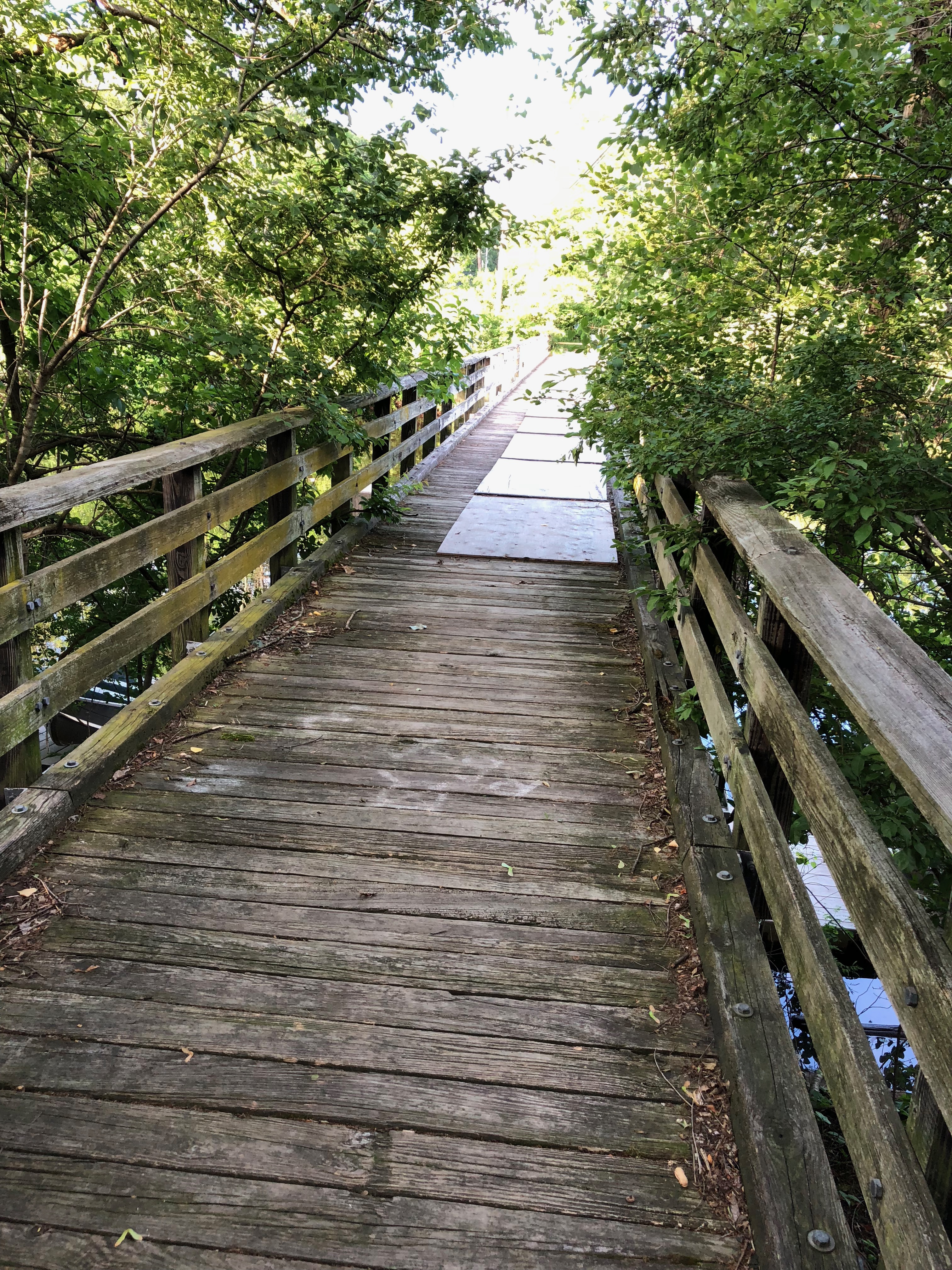 That bridge leads to a paved path that loops around a fenced MWRA facility and under the tracks to Riverside Park from which one can cross back to the south/east bank on the recently improved Riverside Park Footbridge. 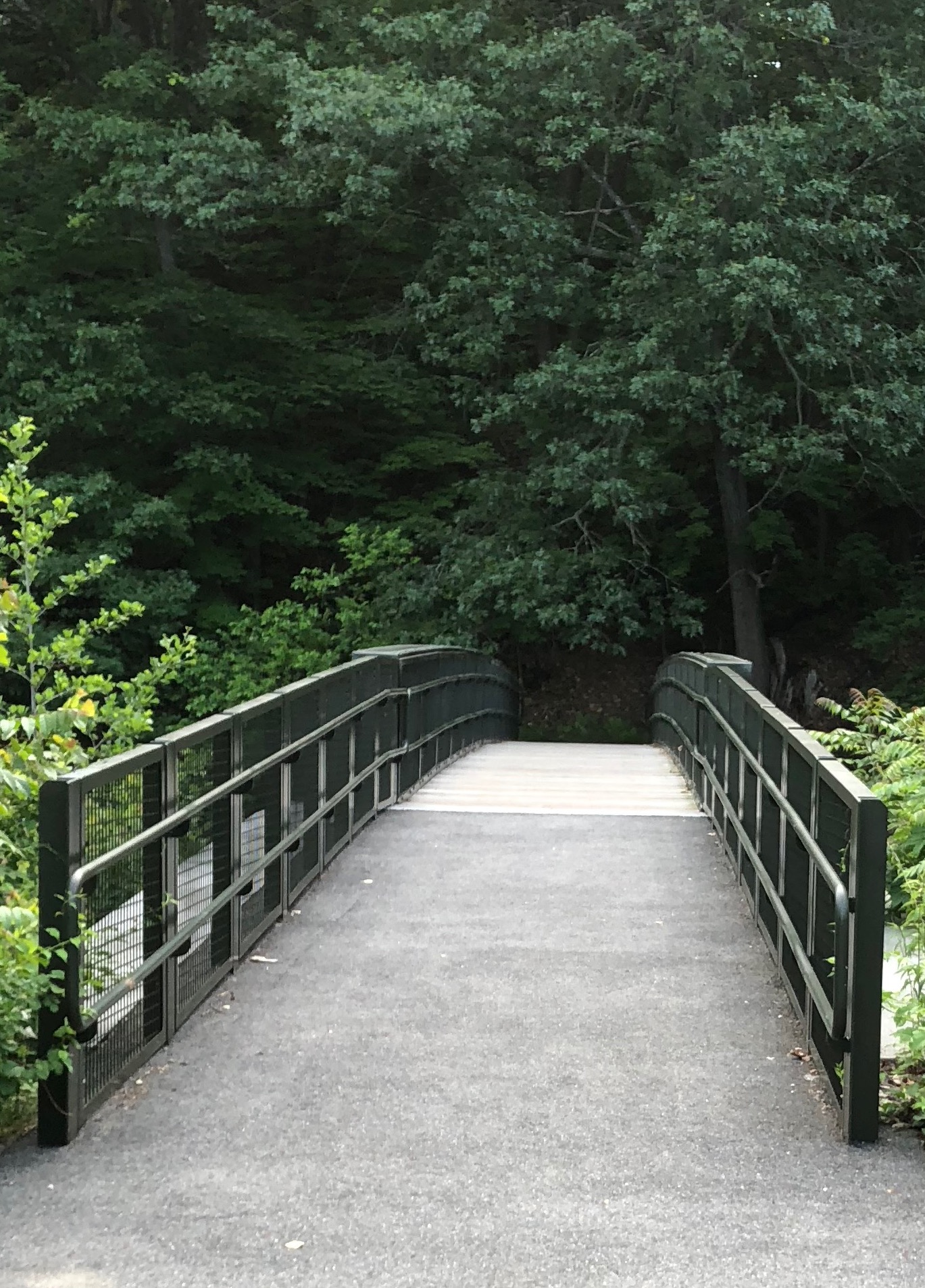 From there, one could turn downstream and dead end at the south terminus of the closed MBTA underpass or continue upstream (right) on the south/east side. 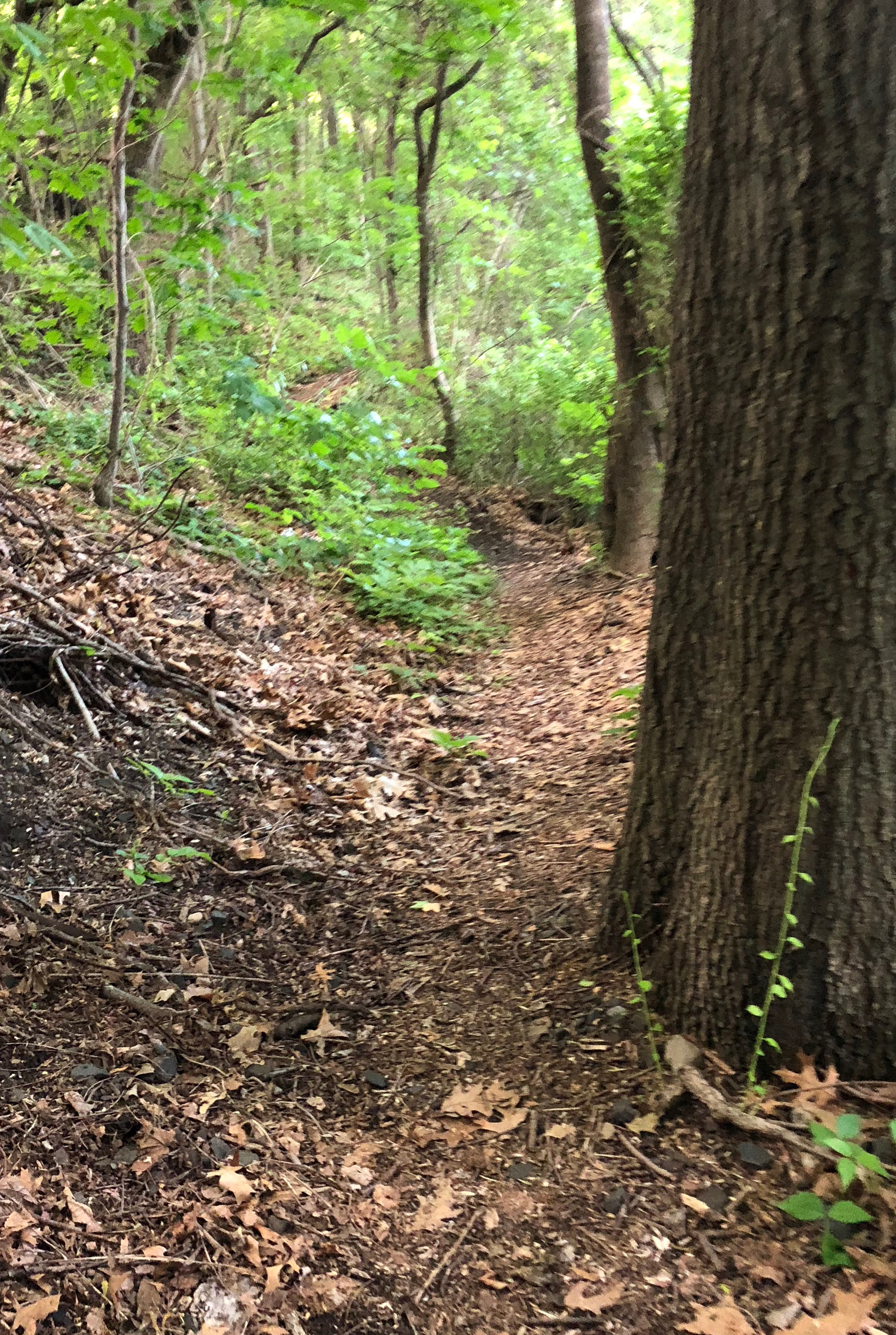 This path upstream from the Riverside Park footbridge on the south/east bank is lightly used and a little buggy but not without charm. 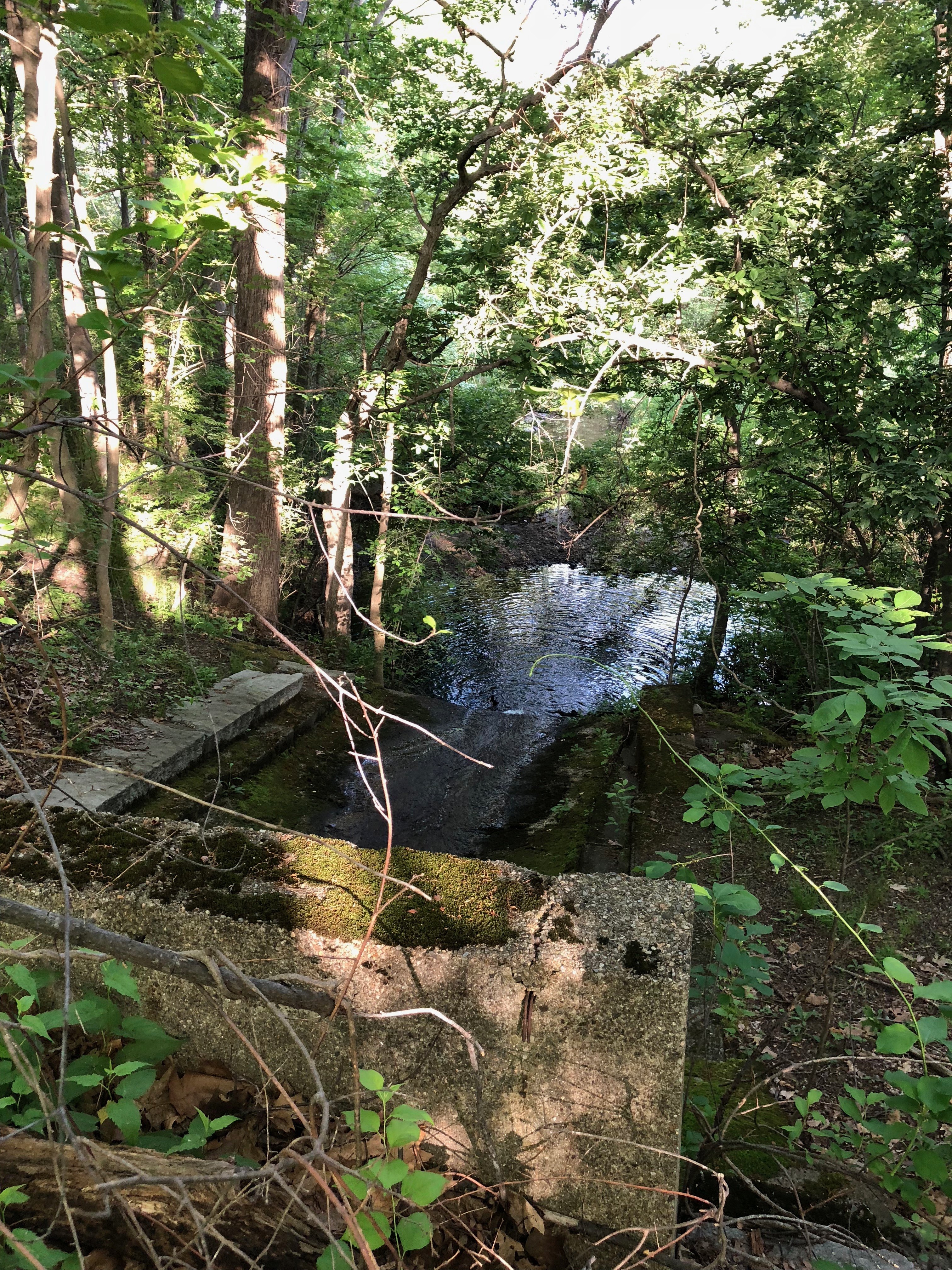 The south/east bank path winds back out to the ramp from I-95N Exit 23, but shortly on the left as one continues south parallel to the ramp, there is a well-trod scramble up to a former railroad bridge which is passable. 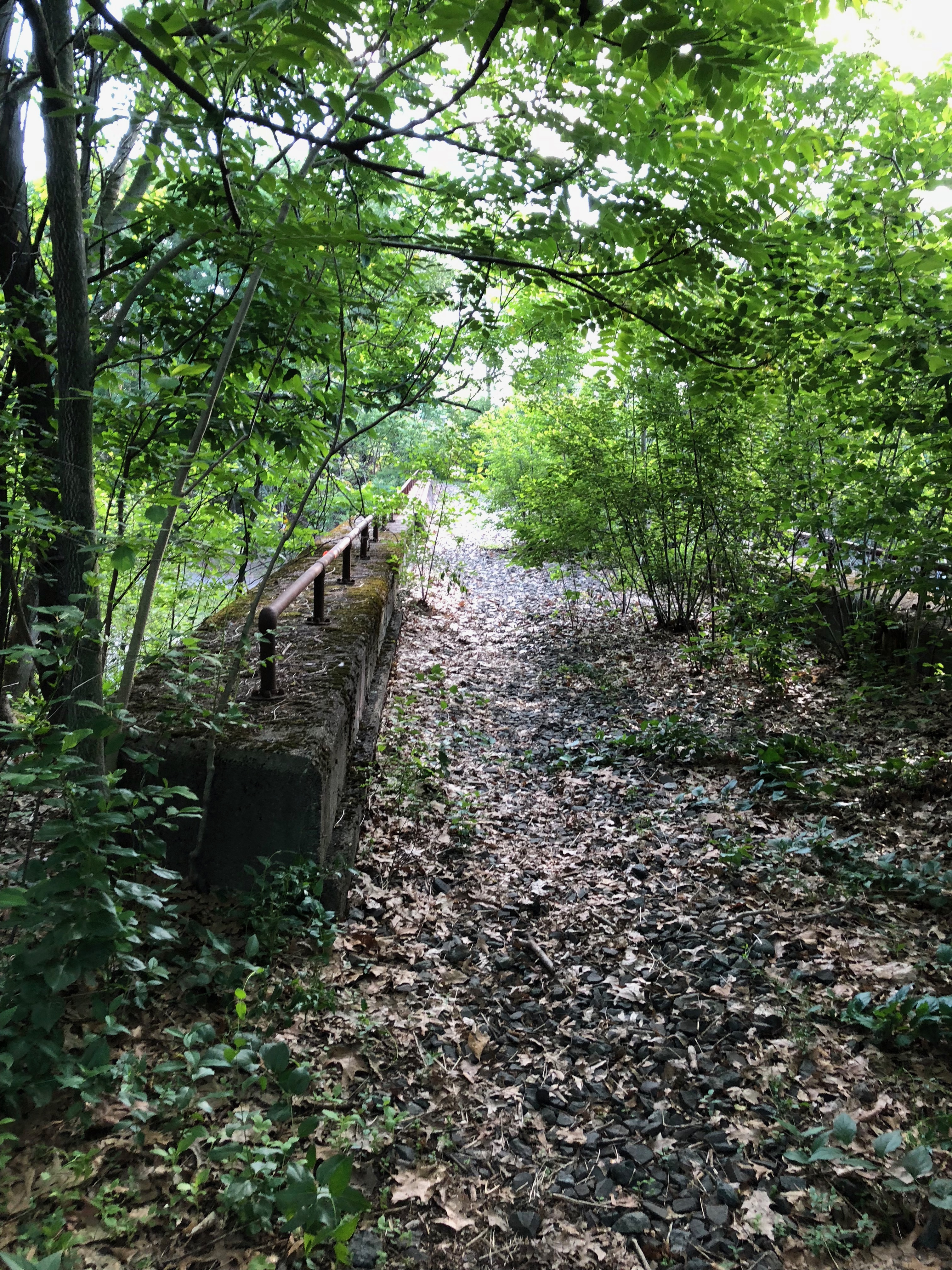 Off Concord Street to the south one can follow a short path segment and cross the newly improved Lower Falls footbridge over to Wellesley near Route 16. 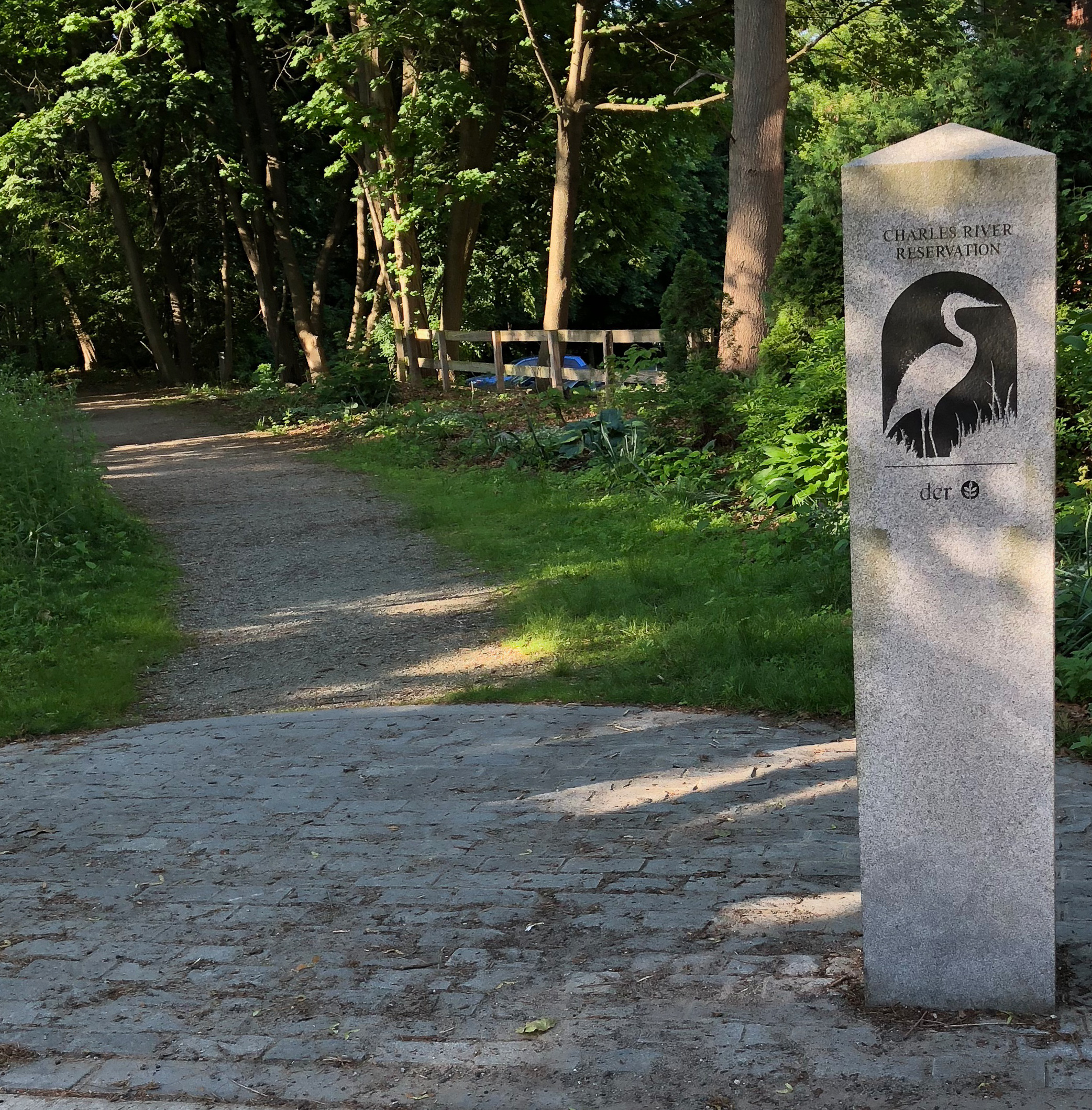 I’ve posted a map of the described routes on either side of the river here.   The south/east bank route requires crossing the Riverside Road footbridge which is in doubtful condition and the rail bridge over the Exit 23 ramp which appears robust but is not maintained for pedestrian use.  The north/west bank is definitely the lower drama route, but Route 30 and Park Road are not pedestrian friendly.   All-in-all, the most conservative path is probably the north/west route without the rambling over the golf course.  This segment is a total of 3.2 miles if one measures from the mouth of the trail at Lyons Park on Route 30 to the start of Quinobeguin road on Route 16.

From DCR presentation materials retained by the Newton Conservators, it appears that the two improved pedestrian bridges mentioned above were redone through the Accelerated Bridge Program.  The unimproved Riverside Road bridge was also considered at this time, but deferred.

Trails more or less along the routes mapped above have long been contemplated for improvement.  In a 2016 issue of the the Newton Conservators newsletter, Representative Kay Kahn described a walk through much of the same territory and her efforts to improve it.   A recent issue of newsletter explains continuing efforts to move discussions forward.

4 replies on “Charles Reservation Connections between Routes 30 and 16”