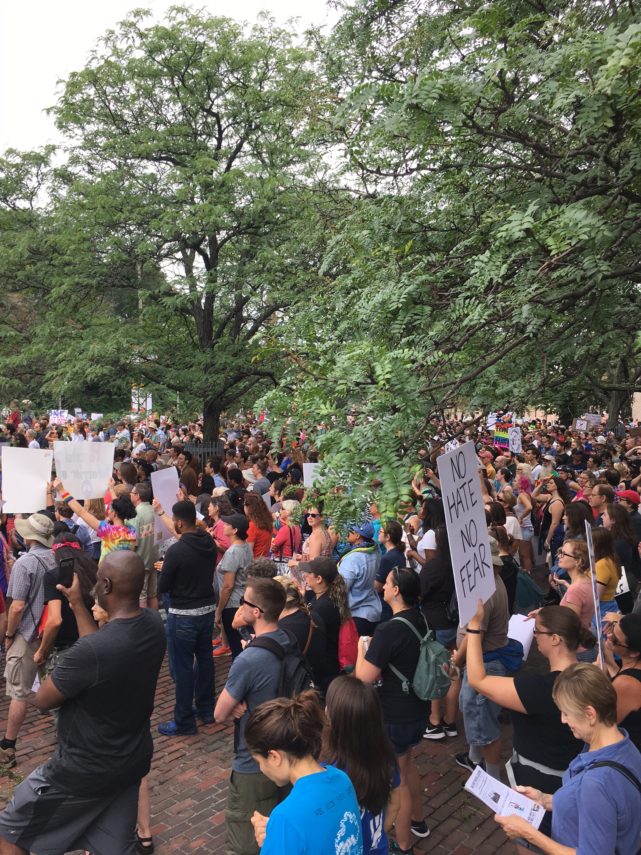 By a ratio of about 1000 to 1, those who converged on the Boston Common on Saturday brought a non-violent American message of liberty and equality. Signs condemning racism and fascism waved above a crowd that stretched as far as I could see.

The thousands who streamed off the Orange Line with me to start the march at Roxbury Community College probably all had some apprehension about the possibility of violence. I was concerned to see a couple of black-clad and black-masked white young people apparently ready for a fight.

But the concern about violence faded into the background as the crowd built in the warming sun, people found friends, and the united tenor of the gathering became clear.

The crowd around me was majority white and majority young, but included all ages and races. The speakers at the start were all young and mostly African-American. They sounded themes of resistance against oppression.

The speakers included no elected officials — Mayor Walsh and Attorney General Healey and I were in the background. The speakers did include a couple of candidates who took the opportunity to make campaign speeches.

The march reversed direction as it started — the sound truck carrying the speakers moved from one end of the crowd to the other. I found myself near the back of the march.

There was a honk band marching that gave a festive tone to the protest message. A friend of mine among them drafted me to bang the tambourine and that was the rest of the march for me.

As the band arrived on Charles Street, the Boston Police tweeted that the “Free Speech” rally that provoked the march was already over and the participants in that rally had left the Common.

The thousands who had arrived at the Common were looking for something to do and there were several crowds clustered around people with megaphones.

The police were very visible. They were rightly concerned that as the crowds split in multiple directions, unpredictable things could happen. Most were on bicycles, but there was also a platoon of state police in riot gear ready on a side street.

I spent some time chatting with officers in front of the state house. Apparently, only minutes earlier, an unruly splinter crowd had circled behind the state house and attempted to break over the fence. One person threw urine on an officer. The police held back but warned the group. It dissipated.

According to the officers I spoke to, there were only a couple of dozen participants in the original “Free Speech” rally that provoked all the counter-protests. They said that essentially all of the participants spoke and a couple of them did sound Nazi themes and Heil Hitler.

Police crowd control barriers separated the “Free Speech” rally by a good distance not only from counter-protesters, but also from journalists. As a result, I have no other confirmation of the overt Nazi message among the speeches.

The counter protest was heated enough that when the speaking was done, the police felt they had to escort the speakers out of the area in prisoner transport vans to prevent violence.

Overall, the events pretty much summarized America for me: There is a handful of overt fascist/racists who are stirring us all up. There is also a handful of people eager to engage in physical violence with them and, as always, another handful of people looking for trouble generally. But most Americans are peaceful, deplore racism and believe fundamentally in liberty and justice for all.

35 replies on “Speech in Boston”