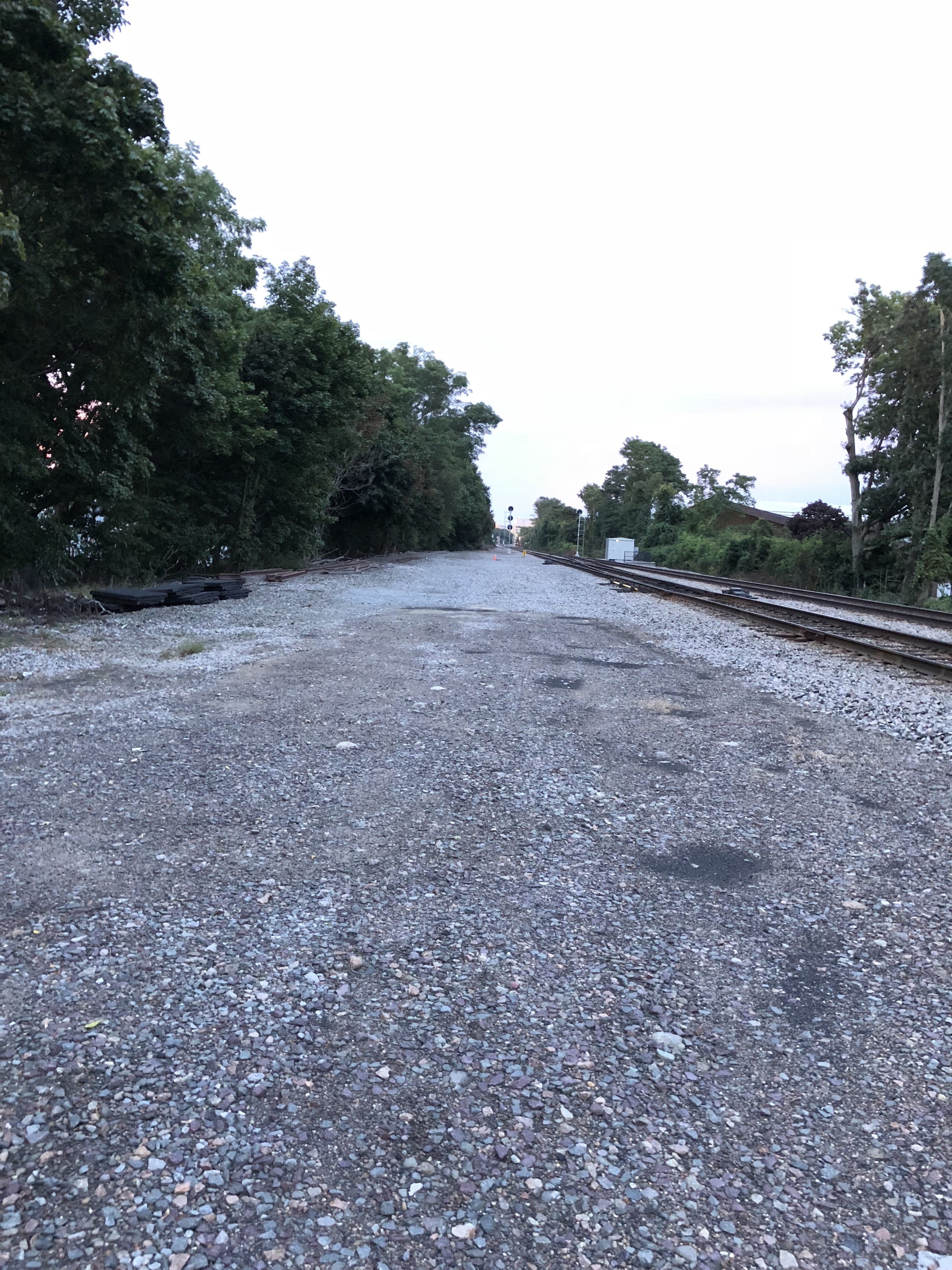 The view looking east along the north side of the tracks near Alexander Avenue, where this statement urges that the path should be routed.

This statement is jointly authored by Senator Brownsberger and Representative David Rogers.

The pieces are finally coming together to build a Belmont community path that will make an important contribution to community safety, but one important decision remains.

Through the good efforts of a series of committees, the Town has developed a path route connecting Waverley Square through Belmont Center across Brighton Street to the existing path to Alewife Station.

Over the last few months, we have worked with MassDOT to further vet that route and get the project in the queue for consideration for state funding.

The state has now officially recognized the regional and local significance of both the north-south connection from Concord Avenue to Alexander Avenue through an underpass and the east-west connection from Brighton Street to Waverley.

This finding means that when a design is ready and all major issues are resolved, we can actively compete for federal funding through the Boston Metropolitan Planning Organization process. Federal and state funds will pay for 90% of the costs of the project. (Some have asked if the federal contribution is at risk as a result of congressional politics. The answer is: probably not — construction funds are important to all politicians.)

It also means that MassDOT will work closely with us to resolve the outstanding issues and move the project forward.  Their assistance is important because of the close proximity of the project to the MBTA tracks.  They have, in fact, already appointed a project manager to assist us.

Conversations with the state have highlighted some of the complex right-of-way and engineering challenges associated with the West end of the project — from Clark Street to Waverley.  Working with the state, we have conceptualized that as “Phase 2”, which can be pursued separately at a future date.

“Phase 1” of the project has two logical subparts — the new underpass to Concord Avenue and the path from Brighton Street to Belmont Center (or a bit beyond).

The new underpass has huge convenience and safety benefits.  State officials recognize those benefits and strongly support it.  The town is moving forward rapidly to design that part of the project.

The town initially proposed that the path cross through the underpass at Alexander Avenue and run behind the High School on the south side of the tracks to Brighton Street.   Cyclists and pedestrians would then need to cross the tracks again at the grade crossing at Brighton Street to reach the existing Fitchburg Cutoff path to Alewife.

MBTA officials are uncomfortable with this routing because of the safety issues raised by running additional bicycle and pedestrian traffic from the path over the tracks at Brighton Street.  The competition for state-federal funds is stiff and these legitimate state-level safety concerns will significantly harm the town’s chances of getting funding.

We are hopeful that the town will revisit its initial routing decision and choose the straight, safe and simple route along the north side of the tracks, which has already been identified by the town as a feasible contingent route.  This routing will make the project an unambiguous win from a safety standpoint and improve its funding prospects substantially.   To the extent that north side abutters have local concerns, we should strive to address those concerns with respectful mitigation measures, not by compromising the safety of the path.

Click here for images of the original proposed route and the alternative we are recommending.

28 replies on “Moving Forward with the Belmont Community Path”