After 50 years of intermittent attempts, we have finally legalized abortion, contraception and consensual adult sex in Massachusetts.  The Governor signed the legislation today.

Since the 60s, we have taken for granted federal constitutional limits on state power to intervene in our private lives.   A line of Supreme Court decisions recognizing privacy rights culminated in Roe v. Wade.  These decisions rendered many older state morality laws unenforceable and so took much of the energy out of campaigns to change state law.

Until today,  “fornication” — consensual sex among adults who are not married — was a crime.  The crime of fornication was formally enacted in 1692.   At that time, the man involved was punishable by a fine of 5 pounds or not more than ten lashes of the whip. In 1785, a minimum mandatory fine of 30 shillings was added for the man and penalties were added for the offending woman — no whipping for the woman, but a fine of up to 3 pounds which if unpaid would lead to incarceration of up to 10 days.  In the statutory revision of 1835, the penalty was set at up to 2 months incarceration for both, which was raised to 3 months  before 1860.  The law remained substantially unaltered for 150 years until its repeal today.

Adultery has always been considered more serious than fornication.  Under a statute passed in 1784, the penalties were defined as follows:

[I]f any man or woman shall commit adultery, and be thereof convicted, every person so convicted shall be set upon the gallows with a rope about his or her neck, and the other end of it cast over the gallows, for the space of one hour, be publickly whipped, not exceeding thirty-nine stripes, be imprisoned or fined, and bound to the good behaviour; all or any of these punishments, according to the aggravation of the offence.

In the statutory revision of 1835, the penalty was set at up to 3 years incarceration and this penalty remained on the books until repealed today.

In 1879, the legislature enacted “An Act in Addition to an Act Concerning Offenses Against Chastity, Morality and Decency”.  This law created a penalty of up to 5 years in state prison for sale of  “any instrument or other article intended to be used for self abuse or any drug or medicine or any instrument or article whatever for the prevention of conception”  In 1966, following the Supreme Court’s decision in Griswold v. Connecticut an exception was created for the sale of contraceptives for married persons by a physician or pharmacist.  For decades, as contraception became widely used, this law remained on the books — until repealed today.

The punitive, puritanical thinking behind criminal penalties for fornication, adultery and contraception is no longer mainstream and the repeal of these laws was long overdue.

Abortion policy remains controversial, but a strong majority believe that the difficult decision to abort a pregnancy belongs to the woman who is pregnant.  That majority has been ascendant in Massachusetts for many years, yet statutes dating at least back to 1860 that punished abortion by up to 7 years in prison remained on the books until repealed today.

One might ask why it took so long.  In general, the legislature avoids difficult subjects if possible.  Any legislation action to soften rules limiting abortions raises concern among some constituents.  Since the Supreme Court’s decisions offered strong protection the case for tackling a controversial issue seemed weak.

Now that the Supreme Court is shifting right, the repeal of these archaic laws felt urgent and I was pleased to see that the repeal passed with a unanimous vote in the Senate and a near unanimous vote (see roll call #409) in the House.  Those votes make a strong statement of commitment to defending adult privacy.

Also this week, for the first time in American history, leadership of a state legislative branch passed from a woman president to a second woman president.  Harriet Chandler handed the Presidency of the Massachusetts Senate to Karen Spilka.  Senator Chandler had long led the charge for repeal of laws infringing on women’s health choices.  It was fitting and not entirely a coincidence that the transition and the repeal happened in the same week.

Archaic laws on many different subjects clutter our statute books — much more work to do. 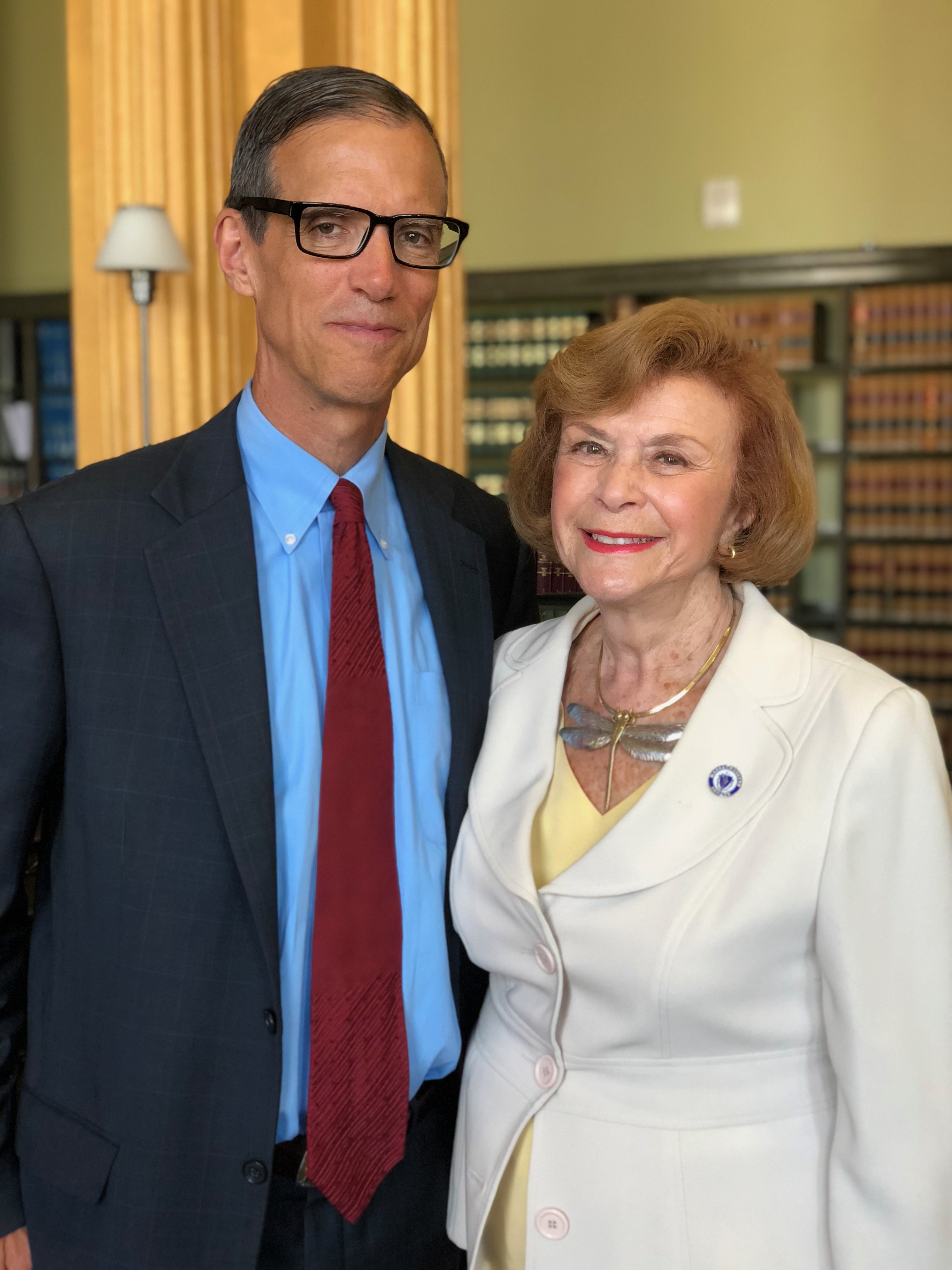 Senate President Emerita Harriet Chandler, radiant after the bill signing, with me.